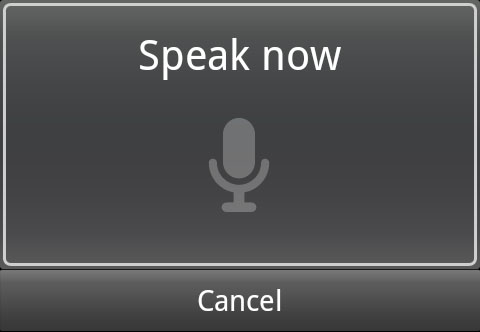 Last week, Google revealed Speech-to-Text Voice Input service for Korean. That’s second, right after English, which was announced with the release of Nexus One and Android 2.1 back in January. So, the basic premise of this is that you can speak into an Android phone and the phone dictates it into text. Theoretically, the algorithm can take up to 1,000 words, with quality degradation with more words spoken. Since it uses Google’s software in its server for the recognition, the phone has to be connected to data network, such as 3G or WiFi.

Let’s be honest, the voice recognition feature in a cellphone isn’t something new. Heck, even my 4-year-old Samsung dumbphone that I had before I bought a Galaxy S in Korea has that feature. The problem was, there weren’t many stuffs that you could do with it. For example, my old dumbphone could do this  and that, but I actually used it only few times when I was bored and felt like voice-dialing someone. Even having an iPhone didn’t change much. The problem was still that you couldn’t do much with it. (Call someone or play something.)

However, Galaxy S changed a lot of things. It was mainly because of Voice Search embedded into Android 2.1. When I wanted to quickly search for something, I would just activate the search and say it. Amazingly, the quality itself was pretty good. This was actually first time that I found voice recognition useful.

Then came the Speech-to-Text. I tried on my friend’s HTC Incredible equipped with Froyo (The app that has the feature runs only on Froyo at this point) which, I gotta say, it was pretty impressive. It recognized Korean no problem, with some issues in English. Maybe it doesn’t like my (or my friends’) pronunciation.

As I said, the voice recognition technology uses Google’s server backend. Good thing about this, of course, is that customers don’t have to download the update for the keyboard app as the recognition gets better, since all Google has to do is just update the recognition software in the backend. But of course, you have to be connected to Internet constantly, though most are usually connected on 3G data network, except for those data freaks who ferociously monitors their usage, probably either because they don’t have much data packets per month to start with, or they just use a lot.

I’ll probably find using Speech-to-Text rather than Voice Search. Main reason is because while the language in the search function is tied by the system language (meaning, if you want to search things in English, you have to change the system language of the whole phone into English), all you have to do on Speech-to-Text keyboard is to change the language on the keyboard (you can also set it up to forcefully only recognize Korean). Since I’m an Korean student studying in U.S. soil, being able to search in both languages is important. With that said, I’ll probably even use Speech-to-Text for searching as well.

Anyhow, it feels like now that voice recognition technology is finally finding its use through the smartphone, and I’ve seen the future through Google’s technologies.